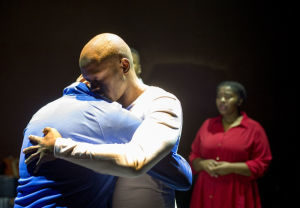 umculo’s latest production is, on every appropriate scale, a new work of such exemplary achievement that it ought to both admonish and inspire all those involved in thinking about the future of opera in this fabulously singer-rich country. Romeo’s Passion is an entirely new work based on material created in interactive workshops with young South Africans. But it is also the bravest and most adventurous of the many outstanding productions staged by Umculo, the most intelligent, creative and socially relevant opera company in the land. Founded in 2010 by Shirley Apthorp (born in Cape Town but now living in Berlin), Umculo is locally based but internationally linked, seeking to harness the infrastructure and skills of the world of European opera to the extraordinary vocal and musical talents of young South Africans. It’s explicitly geared to both development and social change, but without ever compromising a commitment to the highest artistic standards. The company’s remarkable successes have included adaptations and recreations, often of great originality. In the case of, for example, Comfort Ye (June 2015, pp. 753-4), storytelling workshops led to a music-theatre piece based on autobiographical texts written by young South Africans singers, joined to newly composed music and items from Handel’s Messiah and L’Allegro, il penseroso ed il moderato; in the case of Lamento (February 2017, pp. 211-12), selections from Monteverdi’s madrigals and operas were recast as a ‘pastiche opera’ (with Baroque ensemble) to dramatize key episodes in the history of apartheid.

Two years in the making and involving the exceptional talents of Umculo’s Berlinbased stalwarts Robert Lehmeier (the librettist, and a distinguished stage director) and Cathy Milliken (an award-winning composer with uncommon expertise in collaborative creation), Romeo’s Passion is surely the company’s most strikingly original offering to date. The libretto—direct, poetic, never overwritten—is a powerful critique of the crushing consequences of prejudice and discrimination, here metonymically figured around attitudes to gay men. In a simple but deeply fraught story about difference, social expectations, shame, individual autonomy and human rights, a young man is caught between having to disappoint his girl, his parents and society, and being true to his feelings by admitting that he really loves, and is loved by, a man; in the end, his father is able to say, ‘You are born black, you are born gay.’ This plays out in a one-hour chamber opera with a fabulous but always accessible modernist score for a cast of five and an instrumental ensemble of three (oboe, violin, piano). Milliken’s music is crisp, strongly lyrical and sometimes inflected by hints of diverse styles, including the musical, the popular, and even Satie. Moving easily and seamlessly between arioso, aria and ensemble (there is a glorious final quintet), the score is generous in its use of recurring melodic motifs that are pithy, dramatically meaningful, and instantly memorable. The writing for the instrumental trio is such that the combinations are wonderfully varied and constantly interesting.

Staged on what was clearly a shoestring budget, the performance took place, in the round, in a small, windowless space at the inner-city hillbrow theatre in one of Johannesburg’s, and the country’s, most crowded, run-down and rapidly changing urban areas. Surtitles in English and Zulu were projected onto opposing walls. The set was hardly more than a sofa; but so intimate and immersive was the experience that nothing else was needed. At matinee performances, the audience was made up mostly of black schoolchildren. At the one I attended (September 21), they were clearly deeply engaged, and then wildly vociferous in their appreciation.

The singers were simply world class; some already enjoy international reputations. As the Father, Mlamli Malapantsi was imposing and authoritative, and he combined convincingly with the marvellous Hlengiwe Mkhwanazi as the Mother. Thabiso Masemene (the Son) and July Zuma were the young male lovers, and they succeeded in conveying both passion and torment without any loss of vocal refinement. Sarah Suping brought clean, captivatingly honeyed tones to the role of the Young Girl; we will surely be hearing a lot more of her. The post-performance discussion between audience and performers was amazingly caring and enlightened. Of course, the ramshackle venue was about as unlike opera’s usual houses as imaginable, but the place was alive with hope and excitement, and I had a distinct sense that I was glimpsing the future.